In a recent article in my local newspaper Bayside Bulletin about koala road deaths, the president of the Koala Action Group, Debbie Pointing, made a suggestion that  koalas that had been killed by cars should be left on the side of the road for other motorists to see. The response to her suggestion was rather feisty. People said …

“It’s cruel and heartless to leave dead koalas for us to see.”

I admit that I dislike seeing road kill. My saddest sight are the dead wombats littering the side of the highway outside Canberra on the way to the Snowy Mountains. But they do remind me to look out for wildlife crossing the road. The fact is the animal has been killed. That’s the heartless thing. Does removing them change this? Not really. The council said …

“About 35 % of all koala deaths in Redland City are from cars.” 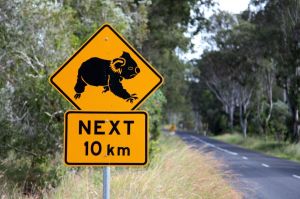 We can easily step out of our warm, safe houses, jump into sound proof cars, turn up the radio and drive to work, forgetting that koalas are out there. We don’t give a second thought to the animals that may have lost their lives in the night while trying to find a mate or trying to find food. While I don’t want to see dead animals on my way to work, it may mean I think twice about speeding in a koala marked area. It might mean I lobby the Government to put more crossings in place, or to put stricter rules on developers about what they can and can’t do in koala populated areas.

So as gruesome as it might be, I tend to agree with Debbie. We need to be reminded of the other critters in our world. We are not the only ones entitled to use this land, and if seeing a dead koala helps save five more koalas, I say it’s worth the unpleasantness.