A cup of tea with Louise Saunders 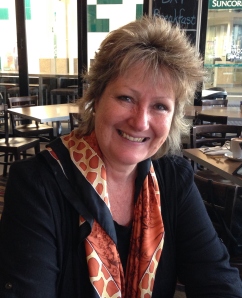 A few weeks ago, Louise Saunders was kind enough to spend the afternoon with me to talk about bats. With my new story Spud & Charli, about bats and Hendra virus, due out in September, I wanted to make sure I had my facts right. Louise has been a bat carer for over 21 years, and was so impassioned by bats, that she founded Bat Conservation and Rescue Qld. http://bats.org.au

So, Louise, what happened 21 years ago that turned you from successful artist to bat carer?

I went on a Batty Bat Cruise around Indooroopilly Island and fell in love with the bats. When the organisers said they were looking for more bat carers, I offered to raise one. One soon turned into many…

But, aren’t you scared of catching a deadly disease – like Lyssavirus?

No. As carers, we are trained to handle bats properly, and we always take the right precautions. I have been bitten by an infected bat, but because I am vaccinated, I am still okay.

What message would you most like people to receive about bats?

Don’t be afraid of bats. We can live with bats in close proximity without getting sick as long as we don’t touch them. A bat found alone needs help. Report sick or injured bats, don’t touch them, and stay safe.

Louise’s passion and knowledge about bats is inspiring. Here are just some of the amazing batty tit bits she shared with me:

Here is what Louise had to say when she was interviewed by Sixty Minutes after their segment on Lyssavirus. http://www.batsrule.org.au/batsrule-helpsavewildlife/2014/3/9/extra-minutes-australian-rabies-interview-with-louise-saunders-bat-conservation-and-rescue

Bats are incredible animals, and according to Louise, probably the most important wildlife in Australia. After 34 million years of evolution, they have hardly changed, and the worst thing we can be is ignorant. Learn more about bats, and be amazed!

Here are some websites I found useful:

Australian Children's Writer.
View all posts by Samantha Wheeler »
← How the year has flown …
7 lines from page 7 →