I’m going on a cassowary hunt. I’m going to see a big one. I’m not scared….

Okay, so I am scared. Very scared. Having searched high and low around Mission Beach, Far North Queensland, for the elusive cassowary, I was eventually sent to the local rubbish dump. The resident cassowary was guaranteed to appear when the gates opened at 10am.

I felt confident this was it after seeing the ‘Take care, recent crossing sign’ shown above.

This was definitely it.

Check out the large dinosaur foot prints in the sand.
And then, at 10am sharp, the dump gates rattled open. A large male cassowary and his teenage chick appeared.

Right on cue. They hassled Peter, the dump guy, for a couple of minutes, before checking me out (my heart was pounding), and then, whoosh, they were gone. Other tourists were left jilted, empty cameras in hand. But I saw them!!

Check out those enormous feet. No wonder they can smash car doors in with one powerful kick.
My next stop was Etty Bay. I spotted this beauty right on the beach . She was far more docile than the dump cassowary, and much less interested in killing me.

She was happily feeding on seeds in the sand, with her chicks being cared for by daddy day care somewhere else. Three cassowaries in three hours … not bad.

But the real reason for my trip up north was to attend World Cassowary Day. Where else would I show off my new book, Mister Cassowary? 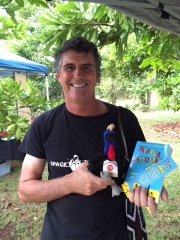 What an inspiration! Locals and wildlife advocates are working hard to put the cassowary back on the map.
They’ve raised the money to keep Lot 66, a cassowary corridor, they’ve lobbied the government to keep the

re-planting the new sprouts on previously cleared land. Way to go Paul Webster, Peter Rowles, everyone at C4 and people like Brettacorp. All the amazing people at Mission Beach have set the bar high. Cassowary high!

Posted in Life. Bookmark the permalink.